In this tutorial series we will cover the basics of programming for the Windows Phone OS 7.  This platform uses the C# and XAML as it core languages.  XAML is the Graphical User Interface (GUI) of the application, while C# handles the logic behind the GUI.  This tutorial will span from teaching you the basics of a “Hello World” program for the Windows Phone 7 (WP7) to a final product using everything we will learn throughout this series. It is quite obvious that Microsoft is the underdog in the mobile OS race when comparing it to the likes of Android and iOS. In terms of developing an application to deploy on a mobile platform, Microsoft will come out ahead for a few key reasons. The first is ease of development when starting out your first program, the ability to drag and drop key items instead of coding them all is a huge advantage. The second key element is that most developers have encountered C, C# or C++ code and Microsoft has “trained” those who have learned any of those languages to adapt to the coding style required for WP7 development. This being said we can now progress to what is needed even before we begin to code.

Microsoft has conveniently encompassed several tools not included in the original Visual Studio 2010 Express release that will make searching for them obsolete, including Microsoft Blend Studio 4. The Zune software is strictly used for deploying applications to either your Windows Phone 7 Emulator or to your actual Windows Phone 7 device. For the following tutorial series I will be using an LG Optimus 7 for development but for the quality of the images displayed the emulator will be used to post pictures of development and outcomes. 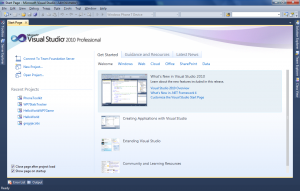 When you first enter the development environment you are presented with a screen that looks like the one above. There are a few key buttons to note that will help you throughout this series. The first one will be the New Project button on the main page. This icon will advance you to a project wizard that will determine what type of application you would like to make for Windows Phone 7. The second will be the list of recent applications just under the New Project button that will allow you pick your most recent projects without having to delve to the standard save spot, which is usually My Documents.

In the next tutorial we will cover a basic “Hello World” application, going over some of the basics of XAML and assuming you will already have some rudimentary knowledge of C#. If you cannot wait until the next tutorial there is someÂ basic XAML knowledge and C# knowledge to get you started. Until next tutorial, Happy Hacking.