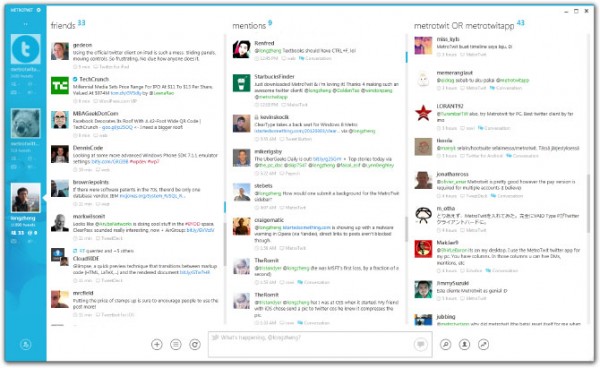 If Tweetdeck (the good, old one or the less useful newer one) aren’t on your radar, you might want to drop MetroTwit on it. This fantastic Twitter app for Windows has been in the beta scene for some time now and has finally emerged as a full-fledged 1.0 client. The styling is obviously very…(Windows) Metro and packs a ton of features including multi-accoutn support. The changelog for 1.0 is pretty extensive, so you’ll want to check out MetroTwit’s official website for the full rundown of what to expect.

That said, I’ve used MetroTwit as our go-to Windows Twitter app for a couple months now and must say that it’s far and away my favorite client. It has a simple, clean Metro-like interface, fluid UI and organizes content in a way that is easy to read. Go ahead and give it a shot and let us know what you think!

**As of writing there is a confirmed issue with MetroTwit 1.- and failed HTTPS/SSL on Windows 8.