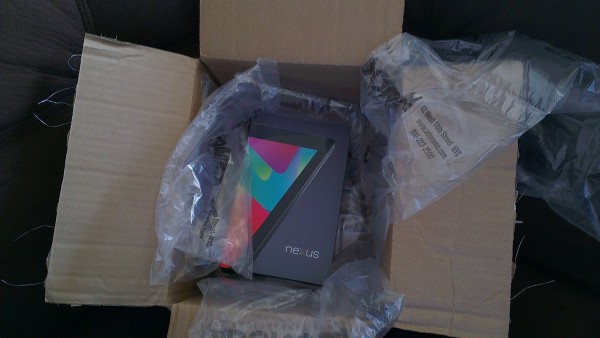 After receiving our Nexus 7 from a third party provider – Adorama – we started up the device and continued through the ease of setup. What we did not realize until we added our gMail account to the device is that we had an email stating that $25 had been added to our Play Store account, as well as two books and Transformers: Dark Side of the Moon. This device, to be clear, was not ordered from the Play Store and we still received the benefits as if we had. We have a call in to Google to ask those who have two (2) devices coming if it will add the $25 a second time or if we might have to use another account. If this is the case, then what really is the benefit of ordering off of the Play Store and being made to wait while other can gain the same benefits from a third party? Let us know your thoughts in the comments below if you have ordered from the Google Play store instead of a third-party provider. Until the next Nexus 7 update, Happy Hacking!

We have just spoken with Google and they told us if you have two devices make sure the first gMail accounts you register are different on each device to receive 2 $25 Play Store credits and then add the other gMail account to download the apps you purchased from previous credits. Very interesting to say the least but we always like to hear your thoughts in the comments below! Until the next update, Happy Hacking!