Windows Phone junkies out there are no doubt chomping at the bit for more information on Redmond’s latest and greatest OS. After the relatively sparse amount of new details (not) revealed at Microsoft and Nokia’s Lumia event earlier this week, learning specs for the upcoming OS as well as its supporting hardware is more imperative than ever. And wouldn’t you know it, details of HTC’s “Accord” (aka: 8X) have been leaked.

Twitter user @Football4PDA posted the final specs (allegedly) for the HTC Accord (8X) to his Twitter account roughly an hour ago, and shows us that for now, Nokia still has the crown as far as specs go. That said, the 8X will hardly be “weak”.

Not quite as high-end as the Lumia 920 (nor as good looking in our book). But for the right price, the Accord/8X will no doubt find a decent following. 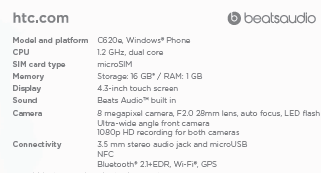