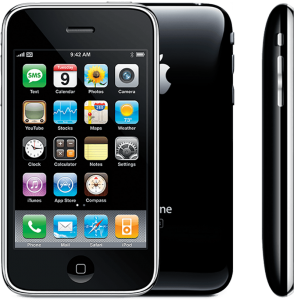 Think back to 2007 when Steve Jobs first unveiled the iPhone. It was new, exciting and something none of us had ever seen before. Over the years Apple has make a killing off of its customers who like the iPhone and its seemingly minor iterations. I can think back to a time when I was excited to grab the iPhone 3GS when it came to Canada. A long time ago, I know, but since then it has been hard to get excited about just another iteration of an iPhone. Well, we are going to see if the iPhone 6 can change that.

We decided to go to our guy at Wireless Wave in the Masonville location – Osman the Cell Guy – and asked us to hook us up with a iPhone 6. Naturally we had the device 10 minutes after 8:00 AM on launch day. Being this early and a little bit too much caffeine we decided to flaunt it to the lineup stacked outside of Masonville malls Apple store. Needless to say when we need to get an upgrade, Wireless Wave and Osman are our first choice. Make sure to check them out if you are ever in London, Ontario. Check out after the break to see our thoughts on the new iPhone 6. 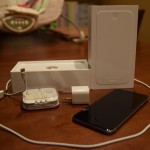 Apple has taken a different route this year in the design of the iPhone 6 and 6 Plus.`Earlier years we have seen the iPhone get stunning new looks that vary vastly from the offering of its iPod lineup. This year they are bringing it back to basics and making the iPhone resemble a very slim iPod. Granted this years models look a hell of alot sexier. Getting down to basics lets start with the screen first.

The screen was speculated to have a Sapphire display on shipment but it seems for one reason or another, they are both equipped with Corning Gorilla Glass 3. The screen is a 4.7 inch display which by the way is equipped with Apples own self proclaimed Retina display with 326 PPI. Aside from that we have the proximity sensor, speaker at the top and at the bottom we have Apple’s iconic home button with some added functionality such as Touch ID and pressure sensitivity.

The sheer size of the iPhone 6 and 6 Plus have forced the hand of Apple to reposition the power button to the right side of the device, just above where the sim card goes. This leaves the top of the device bare for Apple Pay (if it ever makes it to Canada). The left side of the iPhone 6 houses the volume rocker buttons and the silent switch just above those. The bottom of the device is where we are seeing most of the action. from left to right it has the 3.5mm headphone jack, microphone, charge/sync lightning port and then 6 holes for the mono speaker.

The back of the phone has also gotten somewhat of a revamp from last year. The side round into the back and there are 2 strips of plastic that allow the antenna’s to get a signal out of the aluminium unibody design. At the top of the back of the phone is the 8 MP iSight camera. The glass covering the camera is sapphire and we must say images are stunning but check out below.

The internals of the iPhone 6 house an A8 chip for snappier response, 1GB of RAM and we have the 128GB storage model (in space grey). It also has a M8 Motion Coprocessor that assists in the movement of the home screen wallpaper and tracking things like elevation when jogging in apps. The iPhone 6 and 6 Plus are also using a 64bit architecture giving it more power over previous models.

Overall it seems that looking at the hardware, the iPhone 6 has everything going for it. We enjoy the feel of the Aluminium unibody by itself and when a leather case is added it is much more enjoyable in the hand. The next thing we hear Apple mention works in perfect harmony with its hardware is the software that accompanies the phone.

iOS 8 brings a plethora of new features as well as a new look and feel to the OS that matures what iOS 7 brought to the table. One of the big things this year announced by Apple is something called continuity – the ability to hand of tasks between all of your Apple devices (iPhone, iPad and Mac products).

This is quite a step forward as we had the opportunity to test this out the other day. We received a call and our iPad Air started to ring. We pressed decline and the iPhone still rang but the iPad had stopped receiving the call. Another big feature is actionable notifications. For example, when receiving a text message, the notification on a banner appears at the top of the screen. If you swipe down on the notification you have the option to reply inline on the notification. Once the message is sent the notification disappears.

iOS 8 is littered with the little things that can make the iPhone 6 great. unfortunately it is also plagued with issued surrounding applications and crashing. A good example of this is the new keyboards. Lets face it we are excited to have anything but the stock keyboard and SwiftKey delivers. We install it allow it full access so we can have suggestions when typing as well as Swype that we are used to from Android. We walk away from the iPhone and come back and for some ungodly reason we are being asked to enable full access to SwiftKey in order to get suggestions. After a reboot it is fine but we have spoken with many people about this who have done hard resets to try and work out the wrinkles.

Sure this can be fixed with a software update but testing like this should be done with the developers of the software long before release, especially if it is a talking point in WWDC. Overall the software functions as expected and we are excited to see how the iPhone 6 works with Yosemite as the continuity feature is still MIA in OS X for the time being.

We have found that the combination of the hardware and software is not living up to Apples boasts. We still find plenty of apps that crash when they shouldn’t and resolution of older applications is still an issue on the bigger screens. Until developers have time to fix these issues, you may be better of sticking with an older model where you know the applications can work and not be on the cutting edge of Apple technology.

The camera might not be much of a looker on the new iPhone 6 and it may only use digital image stabilization instead of the Optical Image Stabilization on the iPhone 6 Plus but you can still color us impressed. This is one of the more standout features on the iPhone 6. Looking at the images below on what you want to bring next time as your point and shoot camera and video recorder!

The new iPhone 6 has more connections to the LTE networks than a CPU has cores. This thing is designed to connect to pretty much any network (pending if you buy it unlocked or on a carrier). We like to operate from the shadows and in the depths of our house out in the middle of semi-nowhere we still get a rogers signal of at least one or two bars. When making a call the sound is crystal clear unless of course you happen to be driving and relying on the built in mono speaker. Our advice? Suit up your vehicle with a bluetooth speaker/headset that you can use and the quality will dramatically improve. 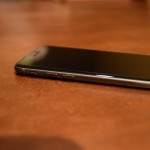 Next to the camera, or ahead of it in most cases, a major thing phones are judged on are how long they last in the real world. Apple is pretty good at holding true to their estimates but we decided to do a few tests of our own. For clarities sake the iPhone 6 comes with a 1810 mAh battery which should be sufficient for a days use right?

When we first received the device we used it right out of the box on a wifi network to set our device up as a new iPhone. Within 2 hours of downloading apps over wifi setting up social accounts and browsing the web we were at 20% from the 90% we started out from. We let the phone down to 1% that evening and charged it back up to 100% for round two. This test went a little longer as you can see from the images below. We had it idled for a total of 22 hours and had about 6 hours of screen time use. Considering we unplugged when it was 100% at 8PM at night and left unplugged for the whole night while sleeping we are quite impressed. We are sure it doesn’t stack up to what the iPhone 6 plus has to offer but it does hold its own. 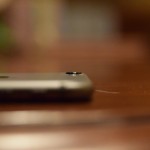 This latest release of iPhones (6 and 6 Plus) has been a shock to the followers of Apple. Most find this phone too large coming up from a 5S or 5C. Others, when asked told us they would switch from their Androids now that iPhone has decided to join the big screen game. For us this phone was great, a bigger screen meant more room to have larger keys on the keyboard and more room for movies on the go. Is this the phone for you? We can’t tell you as we don’t know you personally but if you like Apple products and don’t have an aversion to a larger screen, this is the next logical step for you.

Buyer beware, this isn’t last years iPhone 5S. The device is bigger and with it bigger expectations from the community. Not all were met but most of them can be fixed via software update. Until the next article, Happy Hacking!